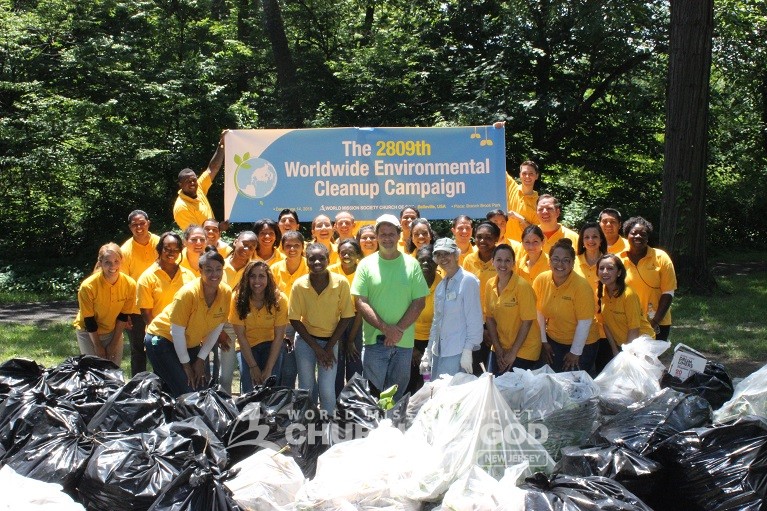 To demonstrate their love for their neighbors, volunteers of the Church of God in Belleville put on their gloves and grabbed their trash bags, and headed to Branch Brook Park. In unity, the volunteers supported the “Care of the Park Movement” at the park on June 4, 2015. The Newark, NJ park received much love from the Church members. In a few hours, they worked diligently to preserve and protect the park grounds. Their main objective was to remove invasive plants and pesky weeds that had menacingly infested the park over time.

Also, through the cleanup, they promoted the importance of maintaining a healthy environment within the community. This is especially noteworthy as residents participate in numerous recreational activities at Branch Brook Park throughout the year. In this way, Church of God members were able to take the lead in caring for the park. Their hope is that their volunteer service initiative will set the example for others to do the same.

Church volunteers working together to remove a rotting log from the park.

Volunteers were happy to make a difference by removing invasive plants from Branch Brook Park.

With extraordinary enthusiasm, the team of volunteers didn’t mind working under the sun to remove weeds, poison ivy and other invasive plants. They divided themselves into groups and tackled the areas that were in need of the most attention. As they continued to uproot these plants and clean the area, many regulars at the park stopped to commend the volunteers. Meanwhile, the organizers and arborists also complimented them for the swift and thorough cleanup. At first it seemed like a lot of work. However, in no time, the volunteers covered several stretches of the Lenape Trail within the park.

The driving force behind the result of Sunday’s cleanup is the volunteers’ belief in God the Mother. As the World Mission Society Church of God believes in God the Mother, members make it their mission to follow Her example of servitude. The Church of God will continue to shine God’s glory through various volunteer activities while encouraging community members to do the same.