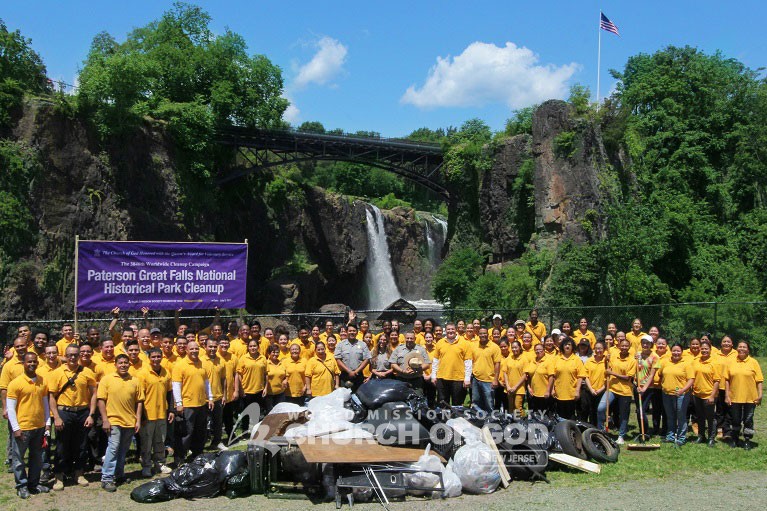 The World Mission Society Church of God honored the 225th anniversary of the establishment of the city of Paterson in a special way on Sunday, taking a trip to Paterson Great Falls. Church of God volunteers organized a mass cleanup to prepare Paterson Great Falls National Historical Park for their yearly celebration. About 100 volunteers from Church locations in Ridgewood, Passaic and Mountainside arrived at the park at 9:30 a.m. on July 2. They met with Ernie Hernandez, a park ranger and native of Paterson, to go over the history of the park and a brief safety education.

During the Revolutionary War, more than 200 years ago, founding fathers General George Washington and Alexander Hamilton stopped to have a meal in front of a grand waterfall. As they ate, the young Hamilton saw the power of the 77-foot waterfalls. It was Paterson Great Falls, which just so happened to be the largest in the Northeast after Niagara Falls. In 2009, former president Barrack Obama signed a legislation that authorized Paterson Great Falls as a national historic park. Moreover, in 2011, the area was formally established as the 397th unit of the U.S. National Park System.

Church of God volunteers receiving instructions from a park ranger before the Paterson Great Falls cleanup.

Volunteers hauling off a tire from the shoreline at Paterson Great Falls National Historical Park.

Church volunteers assisting one another with the removal of waste from Paterson Great Falls National Historical Park.

With a better understanding of the park’s historical significance the volunteers moved in unity and went straight to it. Grabbing their gloves, rakes and bags, they headed towards their allocated zones. Despite the heat of the day, the volunteers marched throughout the 118 acres of land. They picked up bottles, cans, tires and other debris that had piled up over the years. The zeal and efforts put forth by the volunteers touched tourist and locals alike. In fact, some were so moved that they even got in on the action. “It’s great to see that you guys are doing this for the community,” said one of the tourists.

The landmark played a vital role in the nation’s first planned industrial city. However, it fell into a state of neglect in the recent years. Hence, the volunteers hoped to recover the beauty of the hidden jewel of Paterson and rekindle the public interest in the city’s rich history. By 12:30 p.m. they accumulated close to 2,000 pounds of trash. “I came on my day off just to come support you guys,” said one of the park rangers. “Thank you very much and I hope to see you soon.”

Ernie Hernandez was particularly full of excitement as the cleanup came to a conclusion. Furthermore, he asked the Church of God to suggest a name for a newly designated area of the park in honor of the volunteer work. “I cannot believe that this was so successful as it was today,” said Ernie. “Honestly, I can’t wait until you guys come back again. We’re already planning the next cleanup.”

Volunteers from the Church of God happily picking up any garbage they see.