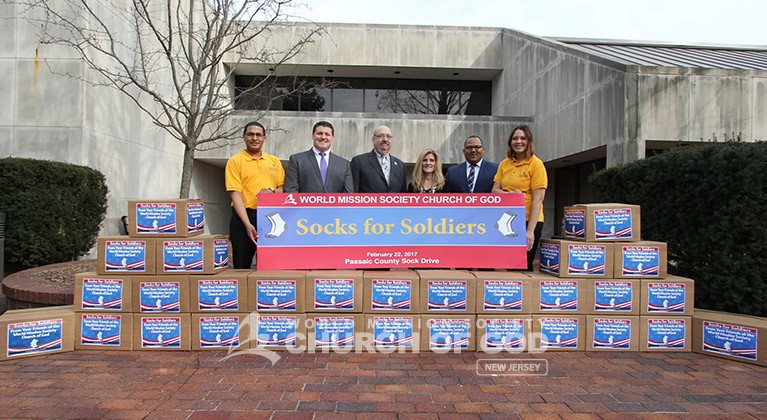 Sometimes the things that seem small in our own eyes can make a world of difference to others. This past Wednesday, the World Mission Society Church of God teamed up with Passaic County for their first-ever county-wide sock drive for military service members. The act of providing the troops with socks, though it seems simple, is more significant than one may think.

The U.S. military furnishes its troops with appropriate necessities and benefits, such as tactical gear and pension incentives. However, extra socks are not always at their disposal. Soldiers put an emphasis on sock contributions; socks regularly appear as one of the highest items on a soldier’s wish list. So, it’s no surprise that the military appreciates sock donations.

The Passaic County Clerk, Kristen Corrado, became the organizer and host of the Socks for Soldiers Drive, recognizing the military’s need for socks. Seeing the opportunity to help, the Church of God announced the drive to its local members in New Jersey and New York. The response was enormous; members made a resolution to collect 1,500 pairs of socks. However, by Tuesday night, the initial goal of 1,500 pairs of socks more than doubled to 3,100 pairs of socks

“I am overwhelmed by the generosity of the Church. You [Church of God members] are going to make many soldiers and veterans very happy,” said Kristen Corrado.

When Debbie Andriani, the Passaic County Assistant, heard about this generous donation, she exclaimed, “I have goosebumps when I see how many socks you were able to donate.”

Passaic County representatives continually expressed their sincere thanks to the Church. Such an incredibly high volume of socks was made possible through the strength of unity. In essence, this effort carried out by the Church of God demonstrates the hearts and attitudes of its members who endeavor to give back to their community and country.

On March 1, the Borough of Hawthorne paid tribute to the Church of God with a Certificate of Appreciation. Mayor Richard Goldberg of Hawthorne commended the efforts as he presented the certificate.

“The clerk was overwhelmed with the donations; a tremendous amount of socks,” said Mayor Goldberg. “I want to especially thank the World Mission Society Church of God for generously donating 3,100 pairs of socks.”