War at the Shore Triathlon Cheering 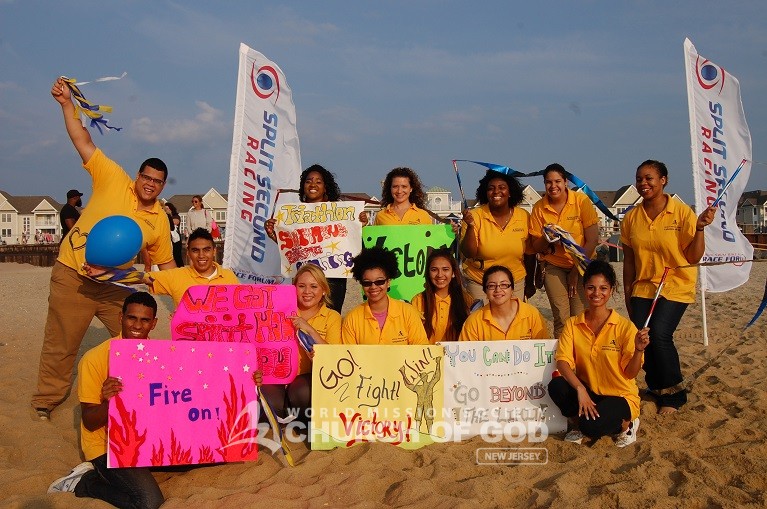 “Face it, you’re awesome!” was one memorable phrase of the many cheers that Church of God volunteers used to encourage approximately 370 athletes of the 19 years and counting War at the Shore Triathlon on Sunday, July 13.

Volunteers came ready with a battle shout that echoed, “VICTORY!”

Energy levels were high in the Long Branch city of New Jersey as the athletes gathered at the beach for their first challenge – swimming.

“Victory! You got that victory!”

“They were awesome! Great support after the swim where they provided a boost while we were climbing the stairs and heading to transition,” said one of the triathletes about the volunteers.

As a result, the triathletes gained energy and renewed their strengths for the rest of the second half of their adventure.

Church of God volunteers made every effort to show support and uplift the spirits of, not only the competitors, but everyone who was working in unity to make this event a great success. Indeed, the event staff and other participating volunteers were moved.

A runner approaches the finish line amid the cheers of Church volunteers, shouting, “Victory! You got that victory!”

“You guys jumped right in wherever it was needed. There were water stops, you were on it. When you wanted things to look a little bit better, you made it look a little bit better,” said Linda Sweeney, Coordinator for Split Second Racing. She went on to highlight the impact volunteers had at the end of the race, saying, “I stood at the finish line many times and they couldn’t help but smile. It was very great. Thank you very much for being here.”

“The volunteers, I must say, this year really stood out! All the years I’ve been doing it, this is definitely the year where the volunteers have made it enthusiastic, provided the most energy and the most inspiration,” said Paul Weber, a triathlete for 22 years and a competitor in the War at the Shore triathlon for 19 years. “They are heartfelt, genuine, and I feel the energy they have. It really helped all the participants and the racers.”

“First of all, it’s energy. It’s total energy! And everybody feels it,” said Doug Rice, Founder and Race Director for Split Second Racing. “Besides being the nicest people in the world, helping us with everything, your energy is fabulous. And I think that is the great part of having you guys here.”

In conclusion, the War at the Shore Triathlon turned out to be a great success. Furthermore, the volunteers hope their positive attitudes would leave a lasting impression on the event staff and triathletes alike. They will continue to practice good deeds while spreading the love of Heavenly Mother.