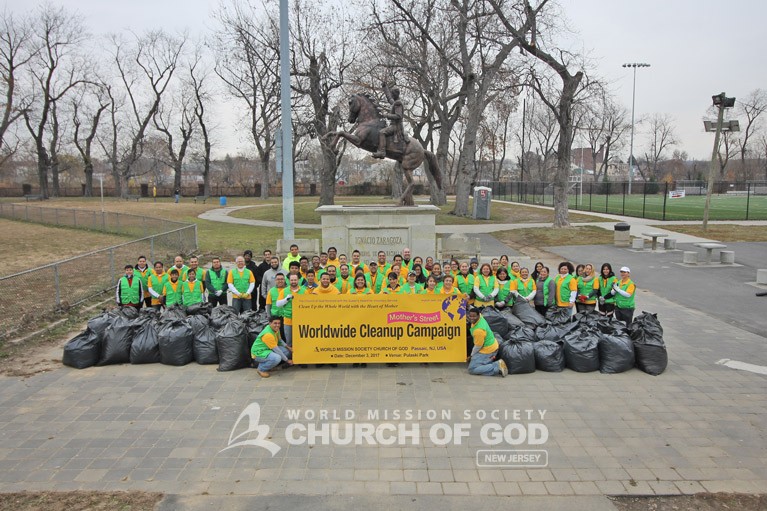 At the end of 2017, the World Mission Society Church of God carried out the “Mother’s Street” cleanup movement. A mother cares for her home, making sure every detail is in order for her family. The source of this maternal love is God the Mother. With the heart of Heavenly Mother, volunteers went out to clean up their own communities—promoting health and happiness among their neighbors.

“Mother’s Street” spanned over a period of two weeks—from November 19 to December 3. The volunteers performed cleanups in multiple NJ locations, including Jersey City, Passaic, Paterson and Perth Amboy. The Churches of God in Ridgewood, Belleville and Bogota were among the churches in participation.

However, it wasn’t only New Jersey that received a tidying up. In fact, Church of God volunteers took to the streets and parks at about 6,000 different regions and 175 countries worldwide. In unity, they fulfilled the goal of cleaning more than 25,000 miles, which is about the circumference of the earth.

Church members worked in unison to remove leaves that had been left scattered along the roads and sidewalks.

Volunteers cleaned up their streets and parks with the heart of a mother, paying attention to the smallest of details.

Church of God volunteers worked meticulously to remove as much trash as they could.

Group photo of Church of God volunteers during the “Mother’s Street” cleanup in Clifton, NJ.

In Passaic, about 70 volunteers gathered at Pulaski Park. They worked in unity to clean a sea of leaves that covered 13 acres of the park. Despite the chilly climate, volunteers rolled up their sleeves and joyfully cleaned the park. They collected 345 garbage bags of leaves, weighing about 15 pounds each, totaling about 5,175 pounds of leaves!

While members were still cleaning, Hector Lora, major of the city of Passaic, came out to personally thank the volunteers for their great efforts, saying, “I am so very grateful for the organization [Church of God] and I’m encouraged so see the participation, especially of the youth. It is a great blessing for our community as a whole.”

Members joyfully worked together to clean up trash from the streets of NJ.

Volunteers walked with smiles from one location to another as they cleaned up their New Jersey parks.

As volunteers worked towards the global goal of cleaning 25,000 miles, they ensured that every corner was tidied up.

Church of God volunteer gladly cleaning up the side of the road in Clifton during the “Mother’s Street” movement.

Meanwhile, 75 Church of God volunteers took a trip to Eastside Park, Paterson. Founded in 1888, the area is a nationally registered historic place; added to the “National Register of Historic Places” in 2004. Nevertheless, about 30 acres of the park was covered with trash such as tires, bottles, chairs, metal rods, cans, etc. By the end of the cleanup, in only a few hours, a total of 110 bags were collected, weighing about 5,000 pounds.

Also, in the downtown district of Jersey City, 60 volunteers spent their time meaningfully by cleaning up Newark Ave. The volunteers collected 100 bags of trash weighing approximately 1,500 pounds. Furthermore, they were able to clean up two miles of Jersey City.

The “Mother’s Street” cleanup campaign is one of many volunteer initiatives the Church of God carries out. Feel free to contact us to learn more about how you can participate in a future volunteer service and help your community.

Check out “Mother’s Street” in the news!