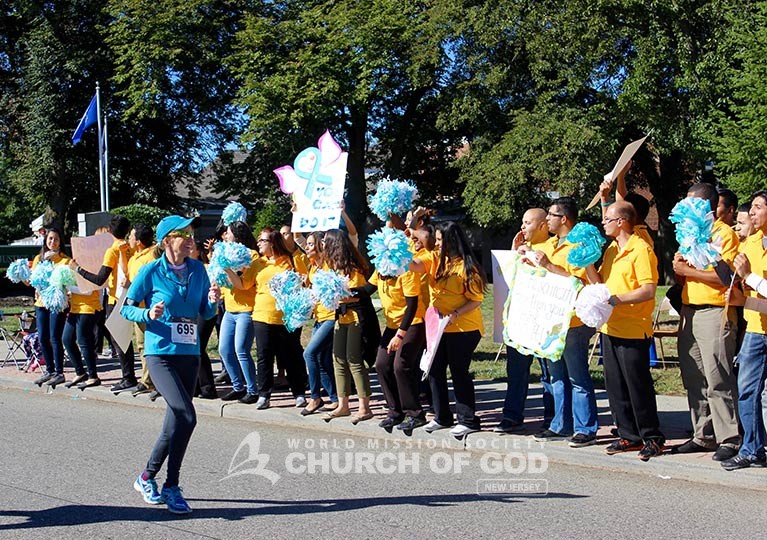 Volunteers from the World Mission Society Church of God offered their arms, legs and voices at the 26th Annual Mayor’s 5K Run/Walk to Break the Silence on Ovarian Cancer. The event, organized by the mayor of West Orange, encourages members of the community to take action in helping women overcome ovarian cancer. In the U.S., more than 20,000 women are diagnosed with the disease each year. The volunteers showed their support for the women and their families by carrying out several functions. They were also sources of encouragement for the 5K runners/walkers.

Church members arrived early in the morning to set up tents and prepare their stations. They assisted with several interactive fundraising activities. There was face painting and even a photo booth to capture the moment with a friend or loved one. People gathered from neighboring areas such as Morristown and Jersey City to bring about awareness on ovarian cancer. With so many gathered in one place and for one cause, the atmosphere was absolutely electric.

The Church of God volunteers took the lead in cheering on the 5K participants from the very beginning until the the end of the race. Their refreshing smiles and lively cheers encouraged all the runners. Several participants praised the volunteers for being to positive and vibrant. West Orange Mayor Robert D. Parisi met with the volunteers before and after the race to thank them for volunteering. Consequently, their efforts made the fundraiser more profitable in the fight against ovarian cancer.

Mayor Parisi greatly appreciated the help from the Church of God and anticipates having the members join in future events. In fact, he was so pleased with the volunteers that he awarded the Church of God with a certificate of appreciation. Overall, the Mayor’s 5K Run/Walk to Break the Silence on Ovarian Cancer was a great success. And much of its success is attributed to the positive impact the volunteers had on the families in need of support and the race participants.

This volunteer effort was just one of many that took place on East Coast Volunteer Service Day 2016. On Sunday, September 25, a total of 25 Church locations along the East Coast as well as in Puerto Rico and the Dominican Republic carried out various types of community services.

These efforts were part of a multi-state campaign to emphasize the importance of volunteerism. Church of God volunteers decided to recommit themselves to their communities after receiving the Queen’s Award for Voluntary Service. This is the most prestigious award in the United Kingdom given to organizations that display exceptional contributions to their communities.

Church of God members hold up signs to encourage participants.

Church of God members cheer on runners at the finish line.

Church of God members encourage runners to push forward to the end!